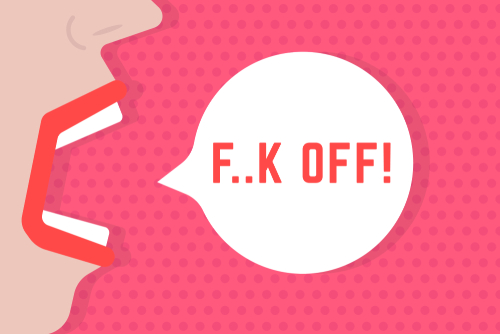 In many societies of the world, including India, the prevalent way to taint a woman’s public image is to call her a ‘slut’ or a prostitute. And if you want to insult a man call him a woman.

Some of these derogatory terms used are actually cuss words used in daily parlance without realising what is being said. It has become a norm. Many such words, initially used in conversations with good meaning and intentions, have become hued with some shade of obscenity later in time.

For example take the word ‘Sir’ and ‘Madam’ and compare them. Few centuries ago, both were used as formal terms of address. But with time, madam evolved to mean a conceited or precocious girl, then a kept mistress or prostitute, and then, finally, a woman who manages a brothel. All that change went for the word ‘Madam’ while the meaning of sir just remained where it was.

A similar thing happened with ‘Master’ and ‘Mistress’. Initially, both words indicated a person in a position of authority. Only the feminine term was contaminated over the decades to mean a sexually promiscuous woman with whom a married man. Meanwhile, master continues to describe a dude in charge of something, like a household or an animal. Master can also indicate a person who has conquered a difficult skill, like karate or cooking.

There have been two types of semantic change that has altered a word’s meaning over time. Pejoration is one of them where a word starts out with either a neutral or positive meaning and eventually devolves to mean something negative. The opposite of Pejoration is called amelioration. Feminine words had usually gone down the former route, while masculine works often go down the latter.

The Bengali word ‘Magi’ is one such word. The positive meaning of the word is a ‘woman’ but eventually through its journey; the word had acquired a negative meaning of that of a ‘prostitute’. The word ‘Sissy’ is another word which is used to describe a weak or overly effeminate man but when in the beginning sissy was the abbreviation of the word sister.

In many instances, it has been seen over the years that the masculine term had ameliorated, while the feminine term went the other way. Linguists have actually determined that the majority of insults for men sprout from references to femininity, either from allusions to women themselves or to stereotype feminine men: wimp, candy-ass etc.

Lot of swear words/ words of abuse carry sexual connotation, which includes genital shaming as well as demeaning of sexual intercourse. Fuck is such a word. It denotes power play and domination. It has nothing to do with love. Ch*tiya, which means ‘ch*ot’ in Hindi or vagina, is a word to demean man. Another word is ‘Pussy’ which is analogous to ‘sissy’ is used to demean men and not women.

As per Oxford English Dictionary entry from the 16th century, the term “pussy” is defined as a girl or woman who bears similar qualities to a cat, like affability and coyness. By the 1600s, the word had surfaced as a metaphor for both a cat and a vagina. It wasn’t used to describe men until the early 20th century, when writers began associating it with tame, unaggressive males.

The word Dick which is used to refer to penis started as a nickname for men during Shakespearean era but later in 19th century, it got its present day meaning. Other derogatory words to insult males are Namard, Gandu, bastard, mother f*cker, sister f*cker etc.

When it comes to genital shaming, ‘cunt’ is an expletive; an offensive term for women didn’t actually start as an insult at all. Cunt’s roots can be traced back to the Proto-Indo-European word sound “cu,” which indicated femininity. (This same “cu” is also related to the modern words “cow” and “queen.”) The Latin term cuneus, meaning “wedge,” is also connected to cunt, as is the Old Dutch word kunte, which gives the word its dramatic final T. For centuries, cunt was used to refer to women’s external genitalia without any negative nuances whatsoever.

Many of us use swear words to demean someone whom we don’t like without realising what we are saying. For eg bastard. If we delve carefully, we will find that we are giving bad names to the person’s mother. Here our patriarchal mindset is working. Even in the case of ‘son of a bitch’ we are doing the same thing. We are targeting a woman, demeaning her.

I personally refrain from uttering cuss words that demean women.

Sometimes cuss words are contextual too. Many of us get sexually high when we utter and hear sexually laced cuss words during intercourse. That is something that so many people adopt to get that kick.

I have noticed that sometimes cuss words are not taken offensively especially among male friends.  It symbolises bond and closeness. I remember this especially since I went to a co-educational institution. I have seen boys create a bond with utterance of slangs. It is something that is not offensive and thus acceptable by all and sundry.

Cuss words uttered by females, on the other hand is not acceptable by society. Than her upbringing, her background is questioned. Uttering swear words made males ‘macho’ and females ‘loose’. So patriarchy is playing a big role in shaping how society would view the foul mouthed.

Many of us have seen the film ‘Parched’ of 2015 directed by Leena Yadav. I remember one particular scene where three women Lajjo, Bijli and Rani, who bonded so well despite facing three different situations relieved themselves of the various oppression meted out to them by shouting slang words at the top of their voice. For these women using swears to demean men gave them a sense of being in power.