The Lockdown: How Gen Z has Sex Online. 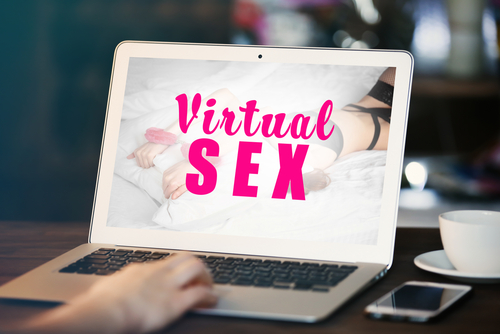 This lockdown has all of us questioning the value of so many things that we have taken for granted until now. As a 20 year old (still part of Gen Z, I think?), I have specifically been obsessing over the conveniences and accessibility the internet has provided. I have been struggling to imagine a world without the internet, and my mind has been blown consistently every time I realize something like how Encyclopaedias used to exist, and information available wasn’t constantly updated.
.
But most of all, I have been completely flabbergasted at how long-distance relationships, especially sexual relationships could have existed before the internet?
Growing up, my sexual life burgeoned at a complimentary pace as India’s internet usage. The ease of texting and sending nudes increased with my sexual coming of age. In fact, Snapchat was launched the same year as I first kissed a boy. So sending nudes and sexting has been a core component of my sex life as well as my romantic life.
So when I watched Dev D, in a desperate attempt to speed up time earlier this week, I was just .. fucking astounded by how Paro had to send that nude to Dev all the way in London. She used an actual Canon camera (without a front-facing camera also), transferred it to a pen drive, printed it out, scanned it and then sent it as an email?
That is just insane.
.
Today, when I want to send someone a picture of my tits, I literally just lift up my shirt, take a picture and send. Well, sometimes afterward I have to deal with the deep sense of shame my catholic upbringing embedded in me but, whatever.
The internet has been an innate part of my sexual and romantic experiences since its beginning. My initial masturbations involved looking at naked barbies in the dress up games on barbie.com, I spent hours and hours stalking my middle school crush on Facebook, I discovered anonymity and kinks on omegle.com, sexted for so long on Kik, and sent instant nudes on Snapchat.
.
And today, the internet is one of the most instrumental tools in keeping my sexual and romantic relationship alive. Especially since this pandemic has me and my partner on the opposite sides of the globe.
In all this, I have found some undeniable advantages of what I like to call, “virtual sex”.
To truly understand and optimize “virtual sex”, it is absolutely necessary to have a fundamental understanding that sex, good sex, goes beyond the physical realm. Sexual pleasure and ecstasy have a strong basis in one’s psychology, spirituality, and intellect.
.
Losing the privilege of touch forces you to explore erogenous zones of your partner’s and your mind. What is it about sex that you like? Which parts of your mundane life, do you find inexplicably erotic? Why is that? How do you, and uniquely you, view yourself as a sexual being?
.
Sex is part of your identity, the very nature of being human, whether you are hypersexual or asexual, It is an undeniable part of living.
.
Virtual sex gives you space, the distance and the patience to understand yourself, and how you truly want to experience life as a sexual being. It is the perfect opportunity to experiment with your sexual preferences. It allows you to try out a new kink, or a new fantasy theoretically with almost no chances of real physical discomfort. You
can stop at the point of your desire, there is no immediacy or expectations of being in the same room that you feel obliged to satisfy.
.
In the beginning of my relationship, my partner was as straightlaced about sex as ever. Their desire to deviate from the typical Hollywood-like “lovemaking” was constantly overcome with a sense of shame and fear of being taken advantage of. In our various periods of being away from each other, sexting and sending each other videos and pictures of ourselves, allowed them to try kinks like wax play and pain without losing control, at his own pace. It allowed me to understand their limits and boundaries, without having crossed them.
Additionally, my absolute favourite part of sexting is how you could spend your entire day sexually activated without actually being confined to your bedroom.
There is nothing sexier than receiving dirty messages and pictures all day, eventually rendering me into messy little puddle of desire by the end of the day. This enhances your sexual experience, elongates sex to more than just a half an hour physical activity in the bedroom.
.
Despite its numerous disadvantages, I truly am grateful to be born in a time the internet could be a part of my sexual relationships.
Like most other girls growing up in India, my circumstances have always prevented me from truly experiencing my sexuality physically. But virtually? I have more experience than most of the adults around me.
.
This amazing combination of physical distance and speedy communication has allowed me to explore the psyche of the erotic, and gain an understanding of what I really need and want. This combined with an incredibly understanding partner has allowed me to unlearn the shame, guilt, and degradation that is attached to a woman’s sexuality.
.
Allowing me, to grow as a sexual being, and accept that part of myself as something that makes me a wholesome human being than anything else.